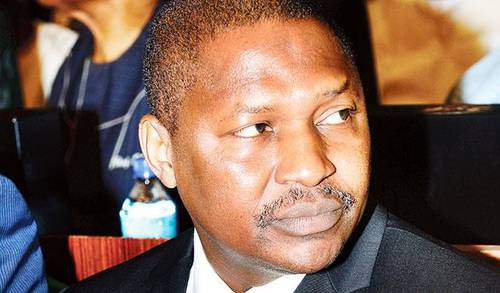 Despite being charged to court for allegedly stealing about 12,000 metric tonnes of crude oil loaded in a vessel, MT Akuada a.k.a. MT Kua, valued at N384m in 2009, Omoh-Jay Nigeria Limited was in 2019 granted an approval by the Attorney-General of the Federation and Minister of Justice, Abubakar Malami (SAN), to dispose the crude oil and diesel in four sea vessels through an open bid.

According to a report by Saturday PUNCH, Malami last year granted approval to some operators in the oil industry to sell five sea vessels holding crude oil and diesel forfeited to the Nigerian Government.

The vessels valued at millions of naira and laden with tonnes of crude oil and diesel were seized by security agencies from illegal oil bunkering operators during different operations.

In separate documents, the AGF directed Omoh-Jay Nigeria Ltd to dispose of the crude oil and diesel in four sea vessels through an open bid.

In another approval, the AGF mandated the firm to sell five vessels despite the fact that the firm and its Managing Director, Mr Jerome Itepu, stood trial at the Delta State High Court, Asaba, for allegedly stealing about 12,000 metric tonnes of crude oil loaded in a vessel, MT Akuada a.k.a. MT Kua, valued at N384m in 2009. The auctioneer was to get three per cent of the sale.

The EFCC had in 2015 arraigned four persons on charges of conspiracy, stealing and receiving stolen goods.

The accused were charged with “conspiracy, contrary to, and punishable under section 516 of the Criminal Code Law, CAP C21, Laws of Delta State 2006”.

According to the anti-graft commission, the accused, sometime in 2009, at Warri, Delta State, within the jurisdiction of the court, allegedly conspired to “commit a felony, to wit: stealing and, thereby, committed an offence.”
It stated, “They were alleged to have committed the offence of stealing, contrary to section 383 of the Criminal Code Law, CAP C21, Laws of Delta State 2006, which is punishable under section 390(4)(c) of the same law.

“According to the particulars of the offence, they allegedly stole about 12,000 metric tonnes of crude oil loaded in a vessel, MT Akuada a.k.a. MT Kua, valued at N384m in 2009, being the property of the Federal Government of Nigeria.”

The third count indicated that the accused also allegedly stole about 4,000 metric tonnes of crude oil, loaded in a vessel, MT Hope, valued at N128m belonging to the Nigerian Government.

Inegbeneki, the second accused in the charge sheet, was also charged with allegedly receiving stolen goods contrary to, and punishable under section 427 of the Criminal Code Law, CAP C21, Laws of Delta State 2006, “having allegedly received from one Itepu (first accused) and Omoh-Jay (third accused), about 12,000 metric tonnes of crude oil, knowing same to have been stolen.”

However, findings by the newspaper indicated that the AGF authorised Omoh-Jay Nigeria Ltd to auction the forfeited vessels.

In a letter dated April 3, 2019, with reference no. HAGF/ARMU/RMDOVSC/2018/T addressed to the Chief of Naval Staff, Nigerian Navy, Vice Admiral Ibok-Ete Ibas, the AGF said Omoh-Jay Ltd. had been granted approval to conduct an open bid and solicited the cooperation of the navy.

The letter signed by Malami, titled ‘Re: Suit no. FHC/ABS/CS/742/2017 FRN and Anor. vs unknown persons (arrested vessels), was received by the CNS on the day it was signed.

It read, “Please be informed that Omoh-Jay Nigeria Ltd. has been granted approval to conduct an open bid for content only for the following vessels: MT Asteris with crude oil, MV PSV Derby with Automated Gas Oil (diesel), MV Zahra with AGO and MV Long Island with AGO (with leave of court).
“For the purpose of disposal of the products under reference, the Office of the Honourable Attorney-General of the Federation and Minister of Justice requests the Chief of Naval Staff to kindly grant access and necessary support as always for the whole process.”

In the second approval, Malami directed Omoh-Jay Nigeria Ltd to conduct another open bid for five sea vessels, three of which were laden with crude oil and diesel.

The letter addressed to the MD of Omoh-Jay Ltd, dated September 9, 2019, with reference HAGF/ARMU/NSA/2018/1, was also signed by the Justice Minister. It was titled, ‘Re: Report on suit no. FHC/ABS/CS/742/2017 FRN and Anor. v unknown persons (arrested vessels).
It read in part, “Pursuant to your earlier instruction dated September 12, 2018, on the above subject matter, you are hereby instructed further to conduct an open bid sale for the following vessels: MT Asteris with crude oil, MV PSV Derby with Automated Gas Oil, MV Zahra with AGO, MT Peace and MV Anuket Emerald.”

It further directed the firm to revert with offers to the AGF for final approval before the conclusion of the sale.

“Be informed that the success fees remain three per cent of the total value recovered from the auction. You are, therefore, expected to submit acceptance letter within 72 hours of the receipt of this instruction,” Malami directed.

It was also gathered that the AGF has directed the EFCC to submit high profile corruption cases to his office.

SaharaReporters had earlier reported how Malami was in the habit of taking over high profile corruption cases only for persons involved in such alleged infractions to be left the hook shortly afterwards.

Also, he was behind the reinstatement of a former Chairman of the Pension Reform Task Team, Abdulrasheed Maina, into the civil service after his dismissal in 2013 for a N2bn theft of pension funds.

Another case taken over by Malami and which never saw the light of day was the N25bn fraud trial of Danjuma Goje, former governor of Gombe State.

The AGF stated that having thoroughly reviewed the matter, found no prima facie case while adding that it was weak.

Malami withdrew the charges against Goje from the court in exercise of his constitutional power, allowing him to now walk as a free man.

Analysts posit that with his latest order to the EFCC, many top corruption cases may fizzle out of reckoning in the coming weeks if events of recent past are taken into consideration.