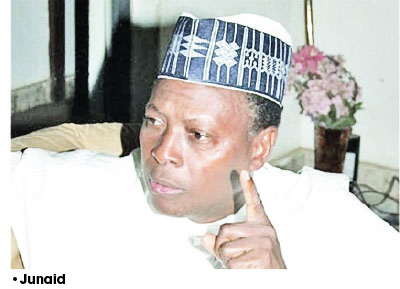 Dr. Junaid Mohammed is gifted with uncommon insights in the politics of  Nigeria. A highly respected Second Republic parliamentarian, he is one of the few clear and firm voices in the fight against corruption in Nigeria. On this recent arrest of the Acting Chairman of the Economic and Financial Crimes Commission, Ibrahim Magu, he is blunt, describing the manner of arrest as fascist in nature even as he condemned the secrecy of the panel. In this interview, he spoke on various national issues.

We would like to have your perspective on Ibrahim Magu, the embattled Acting Chairman of the Economic and Financial Crimes Commission (EFCC), who was arrested and suspended from office recently.

I am aware, through the media of the arrest of the Ibrahim Magu, the suspended Chairman of the Economic and Financial Crimes Commission (EFCC). I consider it very unfortunate, not only because it happened to him as a person- it must be very unfortunate to him…. But it must be very unfortunate because his arrest and the manner of his  arrest have put paid the whole pretence about fighting corruption. It is now clear to me that this government and the previous governments were never serious about fighting corruption. And given the fact that corruption is an existential threat to us as a people, as a community and of course, it is a threat to whatever we are aspiring to be or we imagine that we can be as a people, I think it is really unfortunate. Now, having said so, I have to submit that I am not entirely surprised that the destiny and fate of the EFCC and the entire anti- corruption fight has ended this way. Because make no mistake about it, EFCC will never be same again, especially under this administration and subsequent administrations. So, how the issue will be resolved, how the whole system can be streamlined and be made to be up and doing- I don’t know. I must say, however, that some of the issues which have come to bite EFCC and those who have been made to head the Commission were issues I had personally raised with the then President Olusegun Obasanjo. I had told him that fighting corruption the way it is in Nigeria is humongous task and it requires the kind of single-mindedness, which would also require a collective effort. If the political, economic, security and other elites in the society are not convinced, are not committed to its cause, it is likely to be a fight which may most likely not succeed. I also raised issue of how these people are to be appointed- whether by advertising or through head hunting of people who have distinguished themselves in this kind of fight and I recalled vividly that I made it clear to Obasanjo that I don’t believe it makes any sense to subject the appointment of the Chairman of the EFCC to the ratification of the Senate, given the terrible reputation of most of the senators, then and now, I believe that it is a terrible mistake and now, it is a mistake which has now come to bite. I believe it would be better to make the EFCC directly accountable and responsible to the President of the country, so that if something goes wrong, we know who to hold responsible. The idea that we should subject the Chairman of the EFCC to the whims and caprices of corrupt Attorney Generals who are politicians, first and foremost, is something that I told Obasanjo that it was going to fail and from what we see today, it has failed woefully before our eyes.

Let us first look at the style of arrest of the former EFCC boss. Can we justify picking him up like a “common criminal” right on the street of Abuja?

Absolutely, it is not! In fact, what they did was to show their hands, to expose themselves that they were not after Magu as such. They were after the anti- corruption fight in the country. Because apparently for whatever are his faults- and I am not sure he is without faults- for whatever are his faults, somehow those people around Buhari, who are cohorts with the Attorney General of the Federation, are not happy with the fight against corruption in Nigeria. And they believe that as long as they don’t destroy the organisation and they don’t destroy Magu, they are not going to have their way. And they believe that since they are in power today, they are the Alpha and Omega and there is nothing anybody can do about it. Having cornered Buhari, they are determined to corner and if necessary, destroy anybody and everybody, because that is their ultimate purpose. They are not here for the good of the country or for the good of the community. And sadly,  they don’t give a damn about the anti- corruption fight.  Sadly, even if you are dealing with prima- facia criminal, the way they handled him and they are handling him is nothing fascistic. This kind of arrests were famous during the time of Hitler and his security chief, Muller. This is the kind of thing they wanted to do and it was deliberate. It wasn’t a mistake. They have their apologists in the media, they have their apologists in the society, and they have apologists who are connected with either Buhari and some of them who said that, “after all, he was asked to come and he did not come; that is why they decided to storm him in the middle of the road and hold him”: As far I am concerned, this is illegal. Let us stop deceiving ourselves, the only thing that General Buhari and anybody in this government can talk about someday as a legacy is the legacy on the anti corruption front. But now that they have destroyed it themselves, the game is over.

Malami is somebody from here, we know a bit about him. We saw him grow. Does he seem to you as somebody who has the moral authority to speak on corruption or to petition some people on the basis of corruption?

He does not have the moral authority and if you remember what I had said about him when he was first appointed, I still stand by everything I had said. In fact, his appointment and others like him, whose appointments, I criticized vehemently, I stand by everything that I said. What has surprised me(I thought that what I said about them or my own impression about them was bad enough) is that they have now surpassed my impression.

I have already made a profound statement and to me that for me is very profound – that the war on corruption is over! Whether it was meant to be real or it was meant to be pretenses, it was meant to be a political sloganeering, it is now over. Because nobody in his right sense of mind, even if appointed and cleared by the Senate, would not go to take the fight to the logical conclusion and put his best. It is going to become a way of making money and making sure that you satisfy the special circumstances and the wishes and the whims and caprices of those who are around the President and who determine what happens in government. Some of the things I said personally about Kyari have come to pass, even though unfortunately a lot of it was hidden until after his death. And up till now, a lot of what have been found have been buried in the stupid thinking that somehow, you can bury history indefinitely. You can never bury history indefinitely and nobody ever succeeds in re-writing history the way they thought they could rewrite history about the performance of the Late Abba Kyari and some of the characters who are still around. So let us see what happens.

Some people have attributed the misfortune of Magu and the EFCC on the nature of their recruitment, saying that they are largely police officers and by their background- which we know -, they shouldn’t be at the front-line of the fight against corruption in Nigeria. Do you agree?

First and foremost, being a police man confers no special advantage in terms of fighting corruption. In fact, in the case of Nigeria policemen, it is a major encumbrance. Whether you believe that they are good or that they are not good, the fact remains that the Nigeria policemen have not acquitted themselves creditably in terms of police duties in Nigeria. I am however, aware that some of them when taken to serve outside Nigeria on international assignments have done reasonably well. And now, there is nothing in the enabling law which says that it is only serving or retired policemen who must be chairmen of the commission. So, you see that it was a tradition that we built- a very lousy tradition which was started by Obasanjo and had been carried on by Yar Adua and Buhari himself. That by the way should not have been the case if indeed merit was the criteria that was used in appointing the chairman of EFCC.

Everybody that has gone through the position of the head of EFCC has come out with a bloody nose. Nobody has returned from that journey in the way he began. Should we blame those who appointed them? Is it the appointees? Or is it the Nigeria system that we should blame?

I believe we are dealing with complex issues, one of which is human nature and temptation. The primary issue in the appointments and the disgraceful manner of the exit of most of the people who have served in that position has more to do with attitude of the government of the day, particularly the President himself. And I have no doubt in my mind that from Ribadu to now Magu, all of them were victims of the attitude- either of hostility or submissiveness that is demanded from people who are holding that position. And I have no doubt in my mind that as long as that attitude has not changed, as long as Presidents who one would have thought were the ones to be the main protectors of the EFCC and its leadership- if they don’t have a change of mind, nothing is going to change. I don’t believe that the personality trait of the individual in the office is paramount. It is not. In addition also, there is an issue of how people in power relate to the chairman of the EFCC. It is a job that admits no friendship and it admits no selectivity. It is not the fault of the appointees; it is more of the fault of the system and the fault of the man at the top- the presidents of Nigeria at these different times. And unless this is corrected, especially after this major crash, we are not going to have anything about fighting corruption.

CJN: Delay in Justice Delivery System a Source of Great Concern to Me