Shankar was on board the MT Apecus oil tanker when it was attacked by pirates in April last year.

The events in Shankar’s life over the past two years are straight out of a movie, quite literally.  On April 19 last year when pirates attacked the ship he was working on, he was reminded of a similar scene from the Hollywood film Captain Phillips. Following Tom Hanks’ advice to the crew members to hide in the engine room, Shankar ran down there, trying to anticipate the pirates’ movements and changing his path accordingly. And this actually worked. Shankar managed to escape from the pirates, but came back to his home in Vizag only this Sunday, 19 months later. What happened to Shankar in this time was perhaps no less harrowing than being held captive by the pirates.

Shankar turned 25 in June this year, while he was on board the same ship that the pirates had attacked in April last year. Before working as a seafarer, Shankar had been working as a helper at the Visakhapatnam port. “As I lost my parents at a young age and have no siblings, my friends suggested that I should go work on a ship as I didn’t have any family holding me back. They said I’d be able to earn good money and secure my future,” says Shankar. He underwent maritime training, and got a job with a Greece-based oil shipping company. Shankar did not know at the time that on his very first voyage he would escape a pirate attack, be charged with illegally entering Nigerian waters and remain stranded in Nigeria for 19 months.

Exactly two years ago, on November 21, Shankar boarded a flight from Mumbai to Accra, the capital city of Ghana. He had been hired for a nine-month contract, to work as an ordinary seaman on a vessel named MT Apecus. There were five more Indian seafarers on the ship, while the rest of the crew members were from Ghana and Nigeria. “I was convinced that working on an oil tanker would count as good work experience. After four months in Ghana, the ship set sail. My duties were ordinary work, like tying the ropes when on standby, painting any chipped surfaces and things like that,” Shankar recalls. 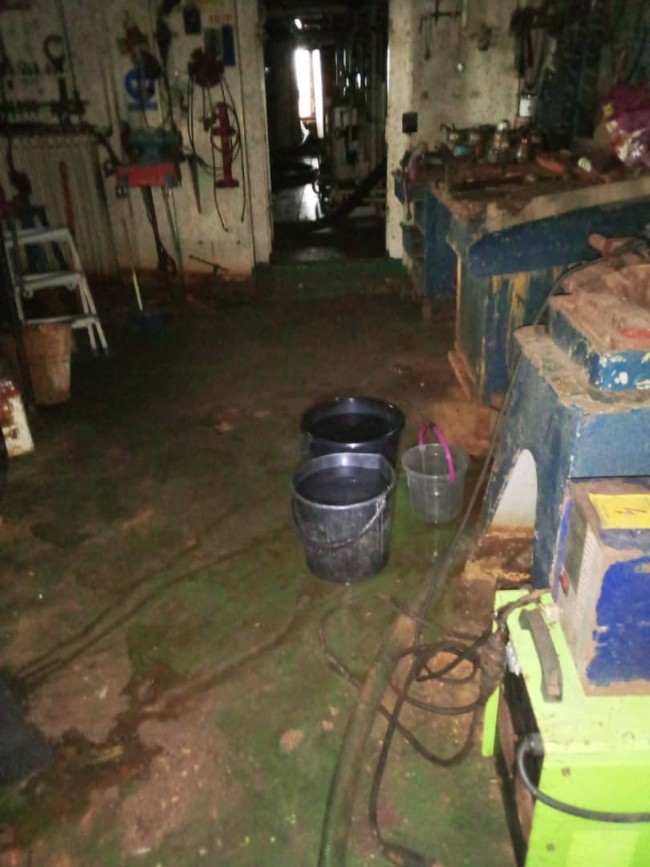 Inside the MT Apecus vessel

The pirates arrived on the afternoon of April 19 last year. But it wasn’t a complete surprise for Shankar, who had heard stories like that of Captain Richard Phillips, and had seriously considered the possibility of such an attack. As he had rehearsed in his mind, he ran to the engine room where he hid along with four Ghanaian and three Nigerian nationals. “The pirates were interested in abducting only the Indians, for a huge ransom. The other five Indians who were captured seem to have lied that there were no more Indians on the ship, to save me,” Shankar says.

Within 15 to 20 minutes, the attack was over. The kidnapped seafarers went through distressing experiences in captivity. However, they were released within 10 weeks, possibly after the ship owner paid some ransom amount to the pirates. By June, they were back in the safe custody of Indian authorities in Nigeria and soon returned to India. But Shankar would have to wait much, much longer before returning home to his extended family, and his fiancée Divya.

Once the pirates left, the ship was steered to a nearby port, on Nigeria’s Bonny Island, with the rest of the crew, including the Captain and Chief Engineer still on board. “We contacted Nigerian authorities for permission to enter. We were on standby for a month or so, but the ship owner seemed to have failed to communicate with the authorities clearly. Although we ourselves had reached out seeking help and explained the pirate attack, we were taken into custody by the Nigerian CID (Criminal Investigation Department),” Shankar recalls. Along with the rest of the crew from Ghana, he was charged with illegally entering Nigerian waters.

After remaining in CID custody for a month, Shankar and his crewmates were sent to jail. “I was told that the ship owner’s response was not found satisfactory by the court. The owner was unable to explain our reason for entering Nigerian waters. But we certainly weren’t involved in any illegal work on the ship,” says Shankar.

In spite of having done nothing wrong, due to unfortunate accidents, Shankar had to spend seven months in prison. “The food was barely edible. I’d force myself to eat it, just so I wouldn’t die of starvation. I didn’t have any money either. I’m grateful for the support from my fiancée Divya, who managed to send me money occasionally,” Shankar says.

In December 2019, Shankar was finally released on bail. While his crewmates managed to go back home, Shankar was stuck. He was sent back to the same vessel, MT Apecus, that was still moored at Bonny Island. Shankar and the Chief Engineer were the only two persons on the ship, which was guarded by Nigerian police. “The ship was in a damaged condition and water would keep leaking into the engine room. I had to help pump out the water regularly so that the ship wouldn’t sink,” Shankar narrates. 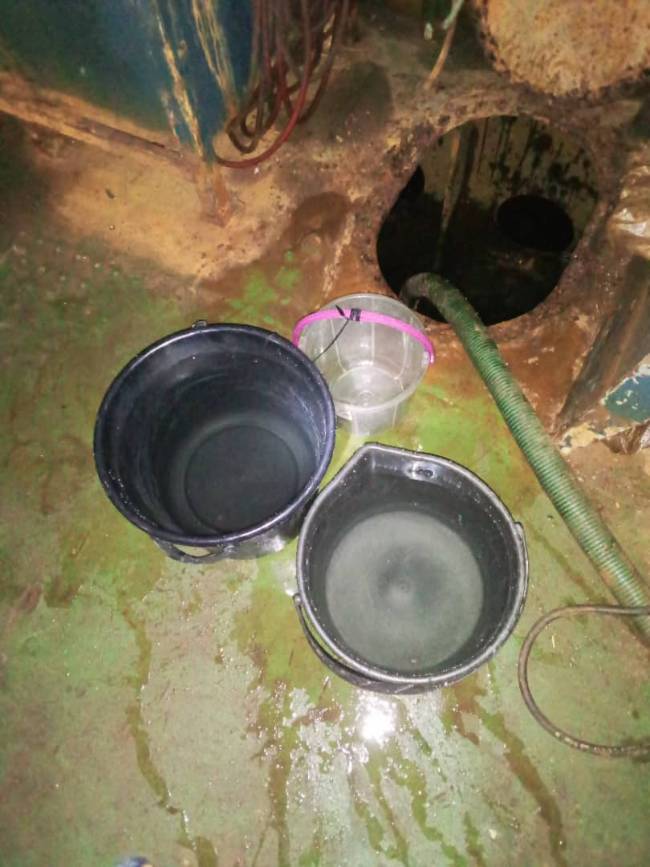 Removing water leaking into the ship

Even out of prison, Shankar was constantly on the verge of starvation. “The ship owner would send provisions for two weeks, which we’d have to ration carefully so it would last four weeks,” he says. Fuel on the ship had to be used very carefully, and Shankar would hand his phone to the Nigerian police for charging so he could call Divya. “I spent my days removing the water, speaking to her on the phone, and mostly sitting idle,” he recalls.

Officials at the High Commission of India at Abuja were difficult to reach. Shankar got in touch with a few journalists and sailor welfare groups, but they would often stop taking his calls after sending him a few provisions. “That really hurt my dignity. They made me feel like I was a beggar whom they wanted to be rid of after sending some help. I didn’t even feel like eating the food they sent, because of how they were treating me,” Shankar says. Then came the pandemic, and with courts being shut, the wait became indefinite. 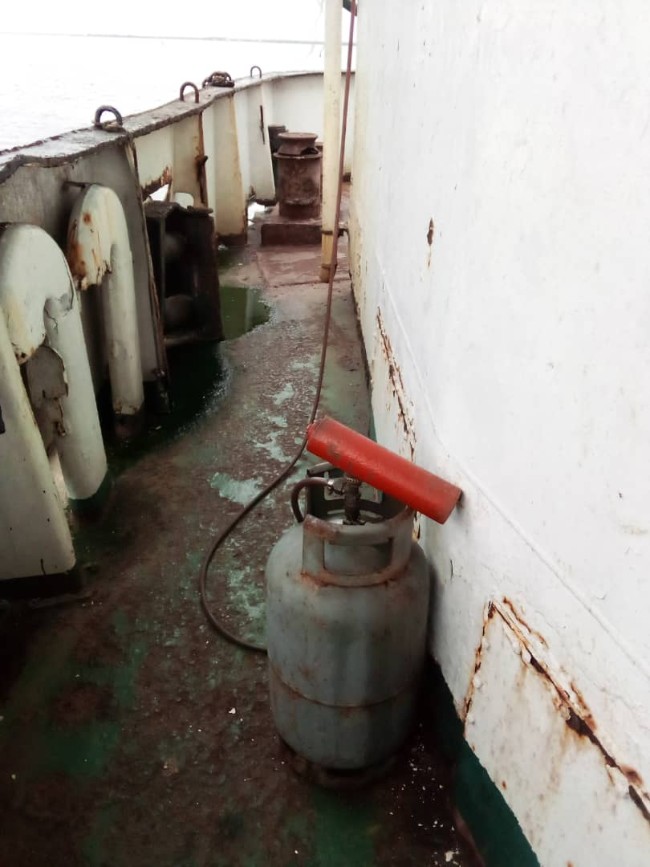 The MT Apecus vessel where Shankar was stranded for months

He had nearly given up hope when he received a call from Manoj Joy, Community Development Manager with Sailors’ Society, a UK-based maritime charity that supports seafarers and their families.

“Shankar said he’d been disappointed too many times and didn’t want to get his hopes up,” says Manoj. Eventually, Manoj got in touch with Shaheen Sayyed, a Kuwait-based social worker, who was able to pool in money for Shankar and send provisions through the Andhra Association in Nigeria.

Manoj recalls how excited Shankar was to lay his hands on Indian food after months of near-starvation. “He kept calling me with excitement as he opened the rice, rasam packets and the pickle and everything,” Manoj says.

Since October, Shaheen says she has tried to urge officials of the High Commission of India and the ship owner to help send Shankar back to India. She alleged that the Indian authorities remained largely unresponsive. The captain of the ship claimed that although the company had been willing to send Shankar back for a while, it was the Indian Embassy officials who had not responded properly.

On November 16, the ship took Shankar from Bonny Island to Port Harcourt, so that he could be handed over to officials of the Indian Embassy. But they did not show up.

@india_nigeria Can you please identify this telephone no: +2349070349989 Whoever this person/officer is should understand he is an government servant and is paid for his service. From last year he has blocked a Seafarer no. and claims that he was saving his life pic.twitter.com/hfMUabGXUh

After escalating and putting pressure on the Indian officials, Shankar was finally released from the ship a week ago. After undergoing COVID-19 tests and getting a temporary passport, he finally got on a flight back home.

Glad to inform that due to our sustained efforts, seafarer Shankar Rao, stranded on MT Apecus at Bonny Island since last year, was safely released yesterday. EAM @DrSJaishankar had discussed it with FM @GeoffreyOnyeama. We thank @NigeriaGov for all legal and security assistance. pic.twitter.com/iOpbfft2bM

Hurdles kept cropping up till the end of his journey. While the Indian authorities had arranged tickets for him to fly back home, there was nearly a 20-hour layover with no hotel accommodation at the Dubai airport — an overwhelming, crowded place that was a drastic change from the 19 months of isolation. He then panicked on realising his ticket was only till Hyderabad. Shaheen then helped him book a ticket to Vizag so he could finally be home.

Shankar’s experience is an eye-opener for young seafarers to be careful about the companies they’re sailing with, says Manoj. “Such incidents linger in their minds for years. Their mental wellness is affected, and their family also suffers,” he says.

While the company had agreed to pay a salary of USD 300 (and USD 75 for allowances) per month, Shankar says that after reaching Ghana, he was told they would pay only USD 200. So far, he has only been paid USD 300 overall since he was first employed with them.

When asked about his plans for the future, Shankar asks, “How can I make any plans when they haven’t even paid my wages? If I had some money, I could explore options.”

A self-made man, Shankar’s hopes of securing his future with Divya have suffered a huge setback. “It’s a relief that he is back, but we’re trying our best to find options for him. We don’t want his career to suffer at such a young age,” says Manoj, stressing the importance of rehabilitation after such a harrowing experience.

Olajumoke Adebiyi I Have Always Loved Music and Movies