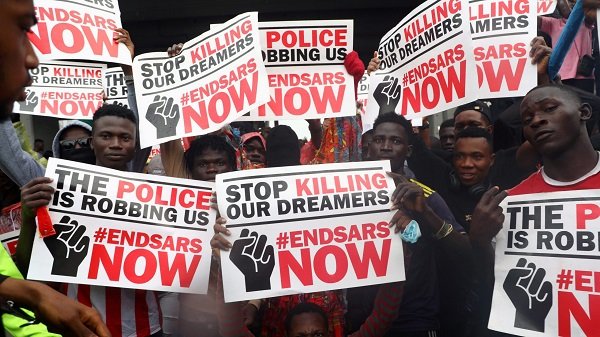 Hoodlums on Wednesday unleashed hail of fires across Lagos State as widespread violence from the #ENDSARS protests entered day two.

A worrying video of mob lynching the Divisional Police Officer (DPO) Agbara surfaced on social media just as over four persons were allegedly killed by policemen.

Residents said the station was razed before the hoodlums carted away vehicles and motorcycles without registration numbers.

Images of burnt buildings, including headquarters of The Nation Newspapers in Mushin, Television Continental (TVC) at Isheri, other media houses, emergency and safety offices/equipment, the Lekki and Ikoyi toll plazas, shopping malls, banks and hotels littered the social media.

They were prevented by guards at the entrance of such places.

This newspaper’s head office was invaded by hoodlums late afternoon who set it ablaze not minding there were people inside the premises. Fortunately, those trapped were evacuated from the premises before the fire escalated although valuable items including cars were destroyed by the fire.

At TVC, the mob who could not gain access into the building, set vehicles ablaze and also torched a part of the building forcing a blackout on the station during the breakfast show.

It was gathered the carnage left many died and scores of others injured as the thugs went about in complete disregard for the 24-hour curfew.

In Surulere, the family house of Governor Sanwo-Olu was set ablaze by an irate crowd while the palace of the Oba of Lagos, Iga Idugaran on the Island was vandalised by youths who carted away valuables, including the staff of office.

It took the intervention of detachments of military forces to douse the situation in the palace.

Also, reporters attached to African Independent Television (AIT) and Silverbird Media were harassed by the mob, who accused them of spying on their activities.

According to the Director General (DG) LASEMA, Dr. Femi Oke-Osanyintolu, one of the agency’s paramedics intern, Marian Omobukola, was hit by stray bullet.

Also attacked was the state Fire Service, forcing the firemen to retreat despite the multiple fires recorded across the state.

Already, one of their trucks in Ikotun was hijacked and set ablaze, same with the truck in Alausa which was also hijacked.

At Ojodu Berger, the hoodlums attacked offices of the FRSC and VIS and set the vehicles of the sector commanders on fire.

When all calls to the fire service proved abortive, officials of the FRSC and VIS were forced to mobilise the fire equipment in their offices and douse the fire.

The police were not left out of the fray as several police divisions and outposts were attacked in reprisals by angry youths.

Sequel to the gunning down of some youths by policemen from different divisions, the mob reinforced and attacked several stations.

At the Adekunle Police Station, the mob set it ablaze after two residents were reportedly shot dead by the police who were trying to enforce the curfew.

Also in Isheri Police Division, the residents stormed the station ablaze while a gun duel was recorded in Mushin area of the state.

At the Lekki-Epe expressway in Ajah, the mob overpowered policemen and seized their guns while in Ebute Metta and Lagos Island Police Post, some youths were said to have been killed by the police.

In Oshodi, the rampaging youths stormed the Makinde Police Division and burnt parts of it as reprisal for the two persons that were killed by the police who were enforcing curfew.

Confirming the attacks, police spokesman, Olumuyiwa Adejobi said: “The hoodlums, who have been causing mayhem in Lagos state, under the guise of the ongoing #ENDSARS protests have killed two policemen at Orile Police Station, wounded many at various stations and set ablaze 10 police formations across the state.

“The violent and criminally-minded hoodlums descended on police stations/facilities and gruesomely murdered two policemen on Tuesday 20th October and Wednesday 21st October, while others were critically injured. They looted the affected stations and carted away some valuables.

“Some of the other affected police stations include Idimu, Igando, Layeni, Denton, Ilemba Hausa, Ajah, Amukoko, Ilasa, Cele Outpost under Ijesha, disbanded SARS officer under Ajegunle, Ebute-Ero Mushin (Olosan) where two policemen were shot by the hoodlums, Ojo and Ajegunle where two patrol vans each were set ablaze.

“Similarly, the hoodlums attacked three new generation banks on Tuesday 20th and Wednesday 21st October, respectively, and carted away unspecified amount of money while some parts of the banks were set on fire before they were dislodged. Some of them were arrested with the loots from the banks, including arms and ammunition.

“At Ajegunle Area, they burnt the Secretariat of Ajeromi Ifelodun Local Government Council and some valuables including cars; and some other private medical and commercial centres were attacked.

“On Wednesday 21st October, the hoodlums again launched series of attacks on many facilities within Lagos State such as the Palace of Oba of Lagos, Shoprite Ajah, Nigerian Port Authority head office Marina, the Governor’s mother’s house at Akerele, VIO/Federal Road Safety Corps offices at Ojodu, Lagos State, Magistrate Courts, Igbosere, TVC station, The Nation Newspapers office, and many other shops/malls were looted.

“Generally, due to the persistent attacks and mayhem caused by the hoodlums, four people have been injured while others lost their lives.

“The command wishes to reiterate that in as much as we respect people’s opinions and rights, it will not allow the present situation degenerate to anarchy and general insecurity where hoodlums will have free days to kill, destroy and loot people’s property with impunity.

“The command will repel any group of individuals that might want to continue with these heinous and barbaric acts across the state. WE ARE COMMITTED TO MAINTENANCE OF LAW AND OTHER AND ENFORCEMENT OF ALL LAWS IN LAGOS STATE.”

In Ogun State, the hitherto peaceful protest embarked upon by youths took a dangerous violent dimension after it was hijacked by hoodlums.

Stating that a civilian also died in the process, he said the mob carted away arms and inflicted serious injury on the DPO, SP Sikiru Olugbenga whose whereabouts remain unknown.

Also in Abeokuta, he said some groups of boys attacked Obada-Oko divisional headquarters and vandalised it.

He said: “In view of this, the Commissioner of Police Ogun State Command is appealing to the youths to eschew violence and embrace peace as violence will do no one good.

“He is equally appealing to traditional institutions, parents and other critical stakeholders to prevail on the youths to stop this carnage and give the government a chance to address the situation.

“The youths are reminded that since the commencement of the protests the police have been nice and civil to them even when some of our men were injured and our stations damaged.

“We even went ahead and released all the 36 suspects we arrested. However if in the course of handling the protests anybody feels offended we plead understanding and not retaliatory measures including killing and maiming policemen and burning and damaging police stations.

“We will ensure that justice is served any aggrieved person. Please and please let us continue to embrace peace rather than violence.”

HOW TO NOTARIZE A DOCUMENT IN NIGERIA