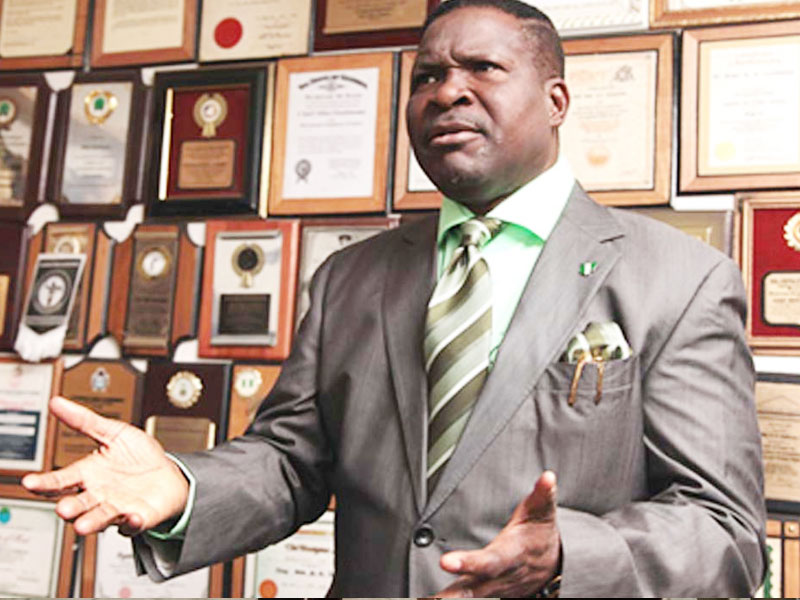 Ozekhome, who called for a restructuring of the anti-graft agency to make it more effective, said Magu in a bid to please his paymaster played to the gallery, operated with impunity and disregard to provisions of the country’s law.

According to Ozekhome, the anti-corruption war under Magu had been, “poorly, sectional, selectively and fraudulently fought, leading to its current ineffectiveness.”
Ozekhome’s position on Magu’s leadership of the EFCC was contained in an 84-page documents presented to the Presidential Investigative Committee, probing allegations of mismanagement of recovered assets and finances under Magu between May 2015 and May 2020.

“The EFCC of the last 4 years under Magu has become a lawless organisation that violates people’s rights with impunity, disobeys court orders, intimidates the Judiciary, harasses lawyers, kills entrepreneurship and causes capital flight and massive disinvestment,” he said.

The rights activist, who stated that his appearance before the panel was “not necessarily for damage assessment, or to pull people down”, said Magu fully epitomised the EFCC.

“Thus , you cannot differentiate Magu from the EFCC and the EFCC from Magu. They are Siamese twins, and six and half a dozen. This is because the EFCC did not represent a strong institution, independent of Magu, its Acting Chairman. Consequently, serial breaches by the EFCC under Magu are equally those of Magu himself.
“In many instances, which I have myself witnessed, whenever you ask the EFCC prosecutors or operatives why they were doing the wrong thing, they would tell you emphatically that “our Oga, Magu, told us to do so”.

Stressing that the EFCC under Magu was a law to itself, Ozekhome claimed that the EFCC was answerable to no one, not even the supervisory Ministry of Justice. “It has been a Lord onto itself, acting clearly above the law. When you ask Magu and his EFCC to, their section of the press, compromised NGOs who are on their payroll (we all know them), those known as the “Magu boys”, their hired “constitutional lawyers” and public commentators and so called “social critics”, descent on you. They brand you with all sorts of names. They say “corruption is fighting back”.
He said one of the alleged “most despicable traction” of the Magu-led EFCC was the blatant usurpation of the powers and functions of courts.

“They routinely slammed “Post-No-Debit” orders on accounts belonging to their targeted victims. They did this with utmost whimsicality, capriciousness and arbitrariness. The worst of all: this is done without any valid court order, whether ex parte or on notice, first secured.

“Where they manage to secure a court’s approval and authorisation with an ex parte order, they quietly go back to sleep, refusing to serve on the victim, the very order or other court processes relating to the ex parte order. This is contrary to laid down principles governing ex parte orders as laid down by the Supreme Court.”

He also faulted Magu’s use of the media and negative publicity in the fight against corruption, adding that everyday Nigerians are given different news of people who are allegedly corrupt; They are first convicted in the court of public opinion rather than a court of competent jurisdiction.
He said for the agency to live up to its purpose, there must be some changes, that will make the institution strong and not necessarily those at its helms of affairs.

“It is of great disappointment, that the EFCC of today, just as it has been since it was set up by the EFCC (Establishment) Act, 2004, has been about displaying strong men and strong women, with each successive Chairman or Acting Chairman trying to outdo himself and others before him, in carrying out the bidding of the government in power, no matter how detestable. They thus play to the gallery.

However, some of the recommendations, Ozekhome proposed to the panel for the effectiveness of the commission include; an amendment to the EFCC’s Act that will see the removal of the headship from the police to now be headed by a retired justice of a superior court.

He also called for the creation of a separate Independent Prosecution Agency as well as Proceeds of Crimes Agency because, “EFCC cannot be the investigator, prosecutor, receiver and at the same time the keeper or manager of confiscated and recovered properties assets and looted funds. That gives room for great temptation to dip its hands into the till and take its own share.

“And it has so far generously done this. It is like a dog hunting and killing an animal. The hunter usually quickly snatches the carcass from the dog; otherwise, it will feed on it. The EFCC has so far played god in this regard. It recovers and keeps forfeited assets, monies and properties. It goes ahead to dispose or sell some to preferred ‘‘buyers’’, cronies, associates and friends. It even extends this to persons under investigation or prosecution. Many a times, it disposes of them at ridiculous prices. It is trite that power corrupts and absolute power corrupts absolutely,” he said.